She works with her hands

This is one of those projects that has an "are you kidding me" story. It, of course, has the usual, and not too unique, story of "I found it, I lost it, I found it again, repeat". But, oh well, when it chose to be found, I would get something done on it before it would take flight on another adventure.
The last time I found it, it needed the (36)  sheepy legs and the grass. I wasn't too keen to do the legs, so I procrastinated for a long time. I tried a few motivational tricks, including bribery to move it to completion. After all, it was sooo close. Nothing was successful for over a year. And then, the sun came out and the angels sang, and I did the sheepy legs and grass. Oh bliss...
As I started to remove the transfereeze from the words, I noticed I had missed one of the letters, it was not stitched. What? There was no floss in the box, and it had been so long since I had worked on it, I had no memory of what I had used.  I took it everywhere with me to try and match it. It was a variegated not black not brown color. sigh.... I was in a lather.
Then, in an incredible moment of clarity, I realized that it is a primitive stitchery, not heirloom, not precise, not perfect. I purchased a close to matching floss, spent five minutes stitching it, and then, finally, it was done. A tweak of my nose, and it was framed. And I bet, in a picture, you can not see any difference. Silly me. 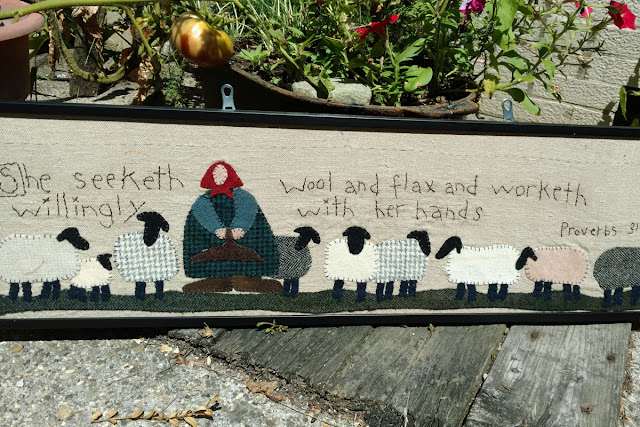 I do remember the pattern called for a very expensive piece of antique linen. I found a linen shirt at goodwill and antiqued it myself.

Luckily, the zucchinni pickles were not as challenging. 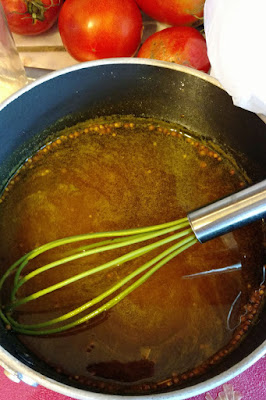 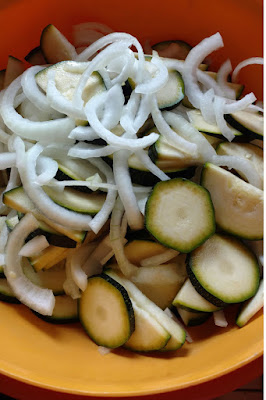 Posted by maggie fellow at 8:59 AM