I knew I was going to need more projects to take for our Friday and open sews coming up in April. I decided to dig out Fair and square and see what was next for moving this project along. The first thing I did was check the blog posts for any mention of this quilt. And I was surprised to read that this project has been a mystery with me from the beginning. I wrote this in 2019  about a string puzzle

Admittedly, it has been awhile since I sat at the treadle to make string blocks. But, when I did, I found a small pile of shirt string blocks that I don't remember. Did I just decide to make them for the parts department or were they intentional. There were paper foundations cut to a specific size and stacked in sets of 10. and there were at least 50. That means they were intentional but for what?  I just don't remember. I have looked through my pinterest boards and my in process lists, and I can't seem to figure it out yet. Until I do, I am still stringing along with them as I can. It may take awhile. This getting old thing is for the birds.

Here I talked about a puzzle I had with a batch of shirting string blocks that I didn't remember. I had gone through my ufo lists and my wish lists, and I couldn't find any project that I would want these blocks, but I had precut a substantial number of foundation squares, so, I just kept going. I had about 10 squares left when I saw the quilt again that inspired them. It is fair and square - a quiltville pattern. Puzzle solved. They are finished now, trimmed and depapered. It's time to look at what else I will need to do for this pattern.

I later realized, I had started fair and square without making any note of it.
After the string blocks were finished, I started making 360- 4 patches that finish at 2 1/2 inches. 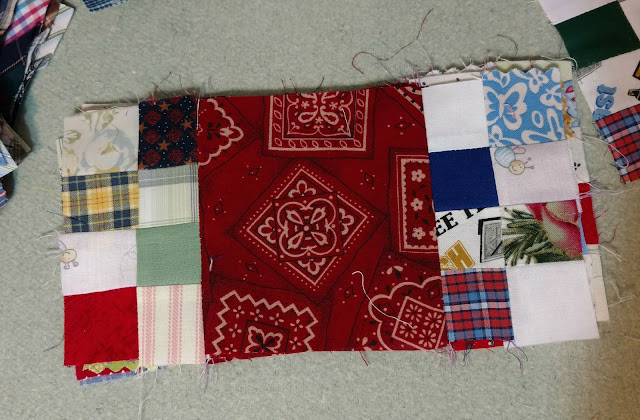 Two Friday group sews, and all the 4 patches are attached for Fair and square, a quiltville pattern. I am thrilled with the scrappy goodness. 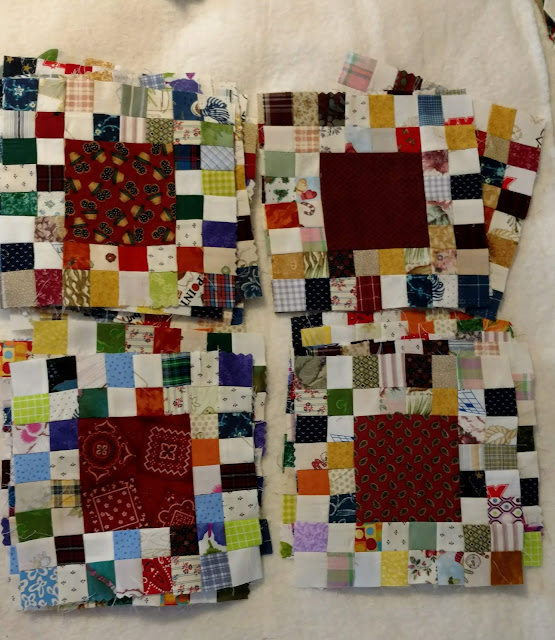 Now, I am scratching my head again. But, I will take it with me and start the process to get this quilt to a top.